Well, I am back from Cyprus.  It was an interesting week to say the least.  It’s a long post (you’ve been warned!).

Let me preface this post by saying that my mum, sister and I visited Cyprus 10 years ago.  We went for two weeks and stayed in the Tasmaria Apartments in Paphos.  World War Three nearly broke out, as my sister and I were raging with the good old hormones of adolescence (I was just coming out of the rough patch, and my sister was entering it), and I’m amazed our mum didn’t bash our heads together and/or kill us off and bury us in the Tombs of the Kings, just up the road.  Anyway, in those two weeks, Cyprus was in the middle of a heatwave, and we religiously slapped on SPF50 (the sun is so much stronger there than here, right?).  We were the only people to leave Cyprus paler than when we arrived.  We had air conditioning problems, the people weren’t very nice, and we’d not really met people peddling their wares so hard before (it’s just not the done thing in England, after all).  Safe to say, we vowed not to return.

Fast forward 9 years, and mother-in-law gets engaged and decides that the wedding will be in Cyprus.  Would we like to go with them?  It was more of a statement than a question.  A villa was booked, flights were booked and all that was left was for M and I to book our luggage and board the plane to Paphos airport.  We were collected in the evening, and driven into the mountains.  Arriving at night, you cannot really gauge where in the world you are, or your surroundings.  When we woke in the morning, we were pleasantly surprised by what we found. 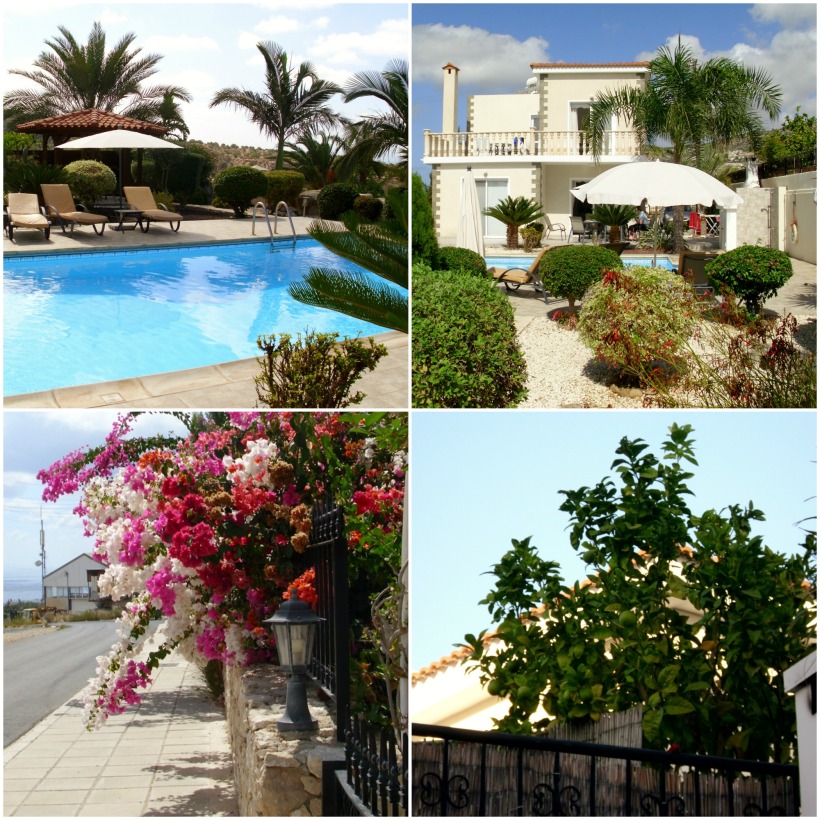 The top two pictures are of our villa, bottom left is the beautiful flower bushes from the villa opposite and the bottom right is our neighbour’s lime tree.  One thing that really struck me was how beautiful some of the colours were.  The light is so white that things seem to ping much brighter than in the UK.

We were nestled in the hills in Peyia.

On Sunday, we went to Paphos harbour for a wander around.  It hadn’t changed too much, and I was pleased to see a couple of the same cafes there.  It brought back memories of my sister munching away on a club sandwich in Hobo’s Cafe. 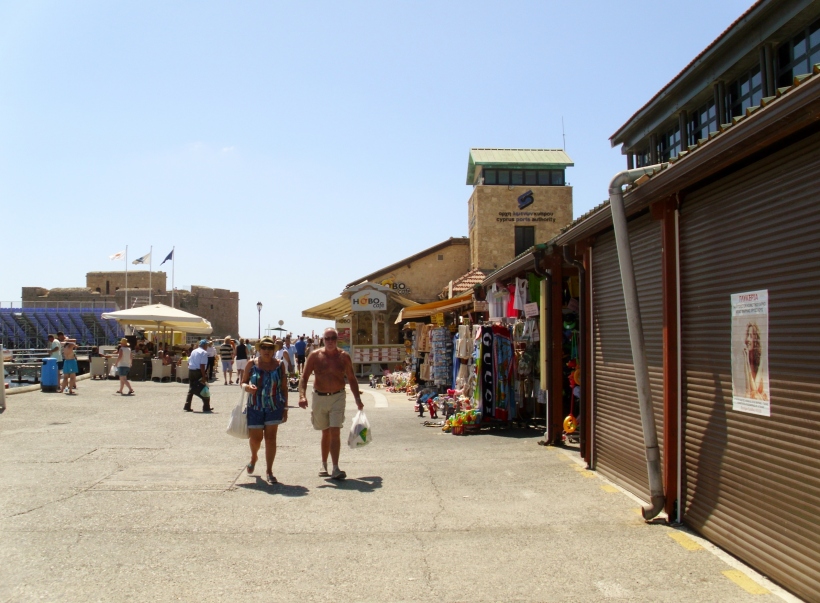 We also had a quick look around the Fort.  One thing, that I really have to say that Britain rocks at, is making the most of our history.  For example, there really wasn’t much information about the Fort, which was a bit of a shame really. 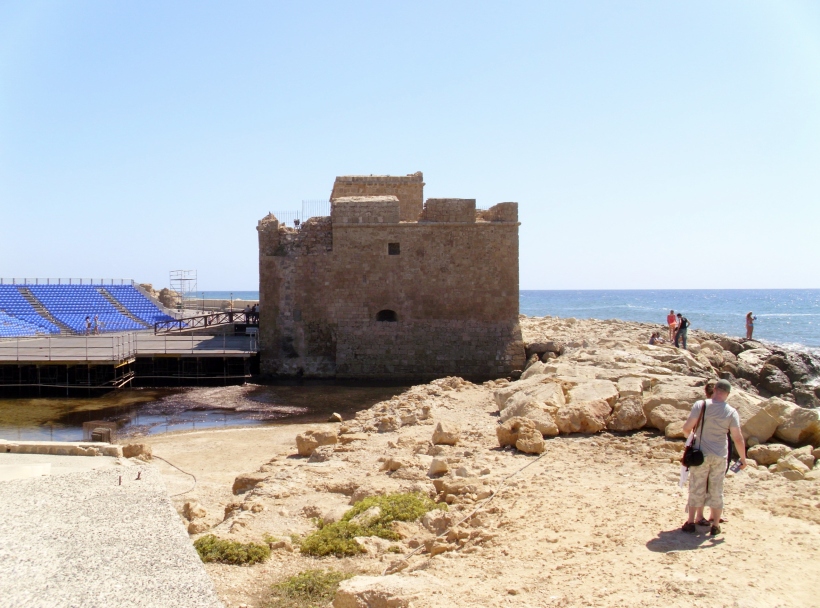 We stopped at the Kings Cafe.  I ordered a Village Salad (salad with feta and olives), and we enjoyed a sea breeze and people watching, followed by the most amazing ice cream I have ever had in my entire 28 years on this planet.  This ice cream kiosk let you choose your own combination of flavours and toppings, or order one of their creations.  I ordered something with peanut butter, vanilla ice cream, Oreos and coffee ice cream.  I could have died there and then and been a happy woman.  Unfortunately, I did not get a picture of it (to be fair, the picture would never have done it justice anyway).

Monday morning, I got up early in an attempt to beat the heat and went out for a run.  I’d intended to go for Week 5, Run 3 (the 20 minutes run).  I started off thinking that.  Then, as I crawled up the hills, I decided to back it off to Week 5, Run 2 plus a bit.  To say it was hilly would have been a complete understatement.

Green is the elevation, blue is the speed (or lack thereof)

Never before have I nearly been pushed off the road by a herd of mountain goats.  That was interesting.  I had hoped to get out again, but the hills really put me off trying.

We visited Lara Beach on Monday, in an attempt to see turtles.  I didn’t realise that turtles are nocturnal, so what with it being scorching sunlight and all, we didn’t actually see any.  We did see some protective baskets which marked where there were turtle eggs though.  I didn’t get any good pictures of Lara Beach (because the light was so clean and bright, it overexposed my poor little camera).

Tuesday was the big day, so the morning was spent preening and preparing.  They couldn’t have ordered a better day for weather if they’d tried – it was slightly cloudy and a smidge cooler than it had been.  I ran around, taking some detail photos of the day that the photographer didn’t get.

It went very smoothly, though I have to admit that I am glad to be having a home wedding rather than a destination wedding.  It was far too hot for me, and while all the brides in the town hall looked gorgeous, I was melting in my purple floaty maxi dress.  The photographer took us to a monastery for some photographs.  I have no idea how they turned out as M and I didn’t get to see them.

In the evening, we went out on a showboat.  That was a bit of a muddle from beginning to end, as something had gone wrong in the communication chain somewhere.  It was entertaining though, and while I probably wouldn’t rush out to do again, I was glad we did it.

Wednesday was a chilling out day.  Chilling probably isn’t the right word, as M and I decided to go to Coral Bay which was great on the way down, but a hell of a struggle on the way back up.  It was a solid 500ft climb back up to the villa.  In 30 degrees with an unforgiving sun made it very toasty.

Thursday we took the car over to Polis, then Latchi.  I loved Latchi – there were so many cats.  It was confirmed that I have a definite cat nip odour, as I seemed to attract them wherever we went.  One of them had a sleep in my bag, and it took all my effort not to scoop him up into it and bring him home with me.  The strays seem to be well looked after, though I still hate seeing strays (all cats should have a home… even if that does turn me into a crazy cat lady). 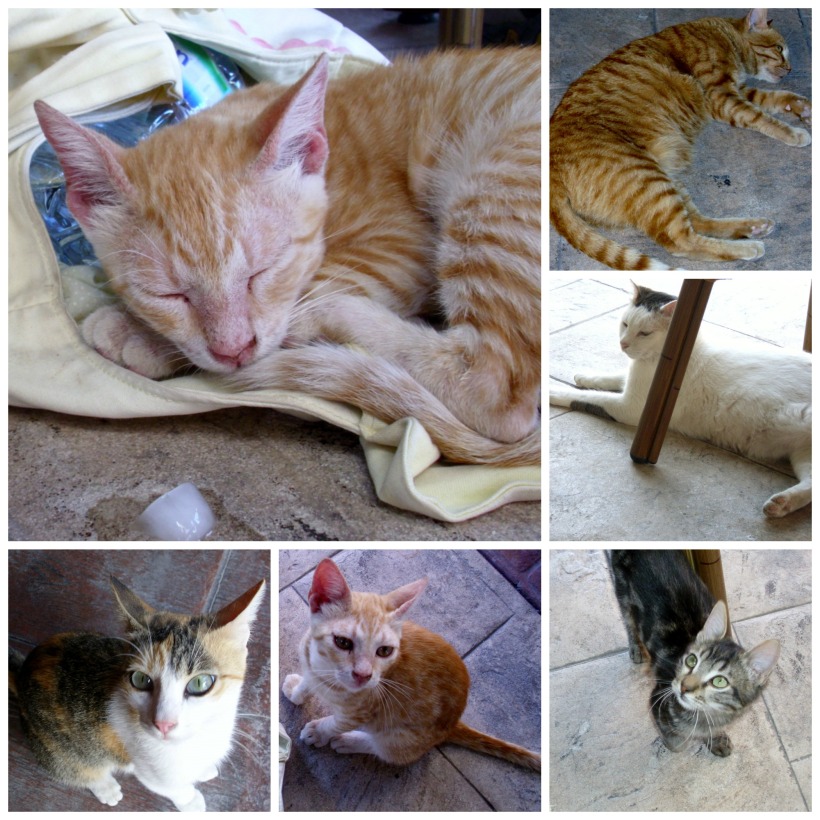 In the evening, we’d booked a table at a local restaurant.  The meal of choice – meze.  I’d tried meze when we’d visited 10 years ago, but I can definitely say that I appreciated it more this time around.  In fact, I enjoyed the food probably the most. 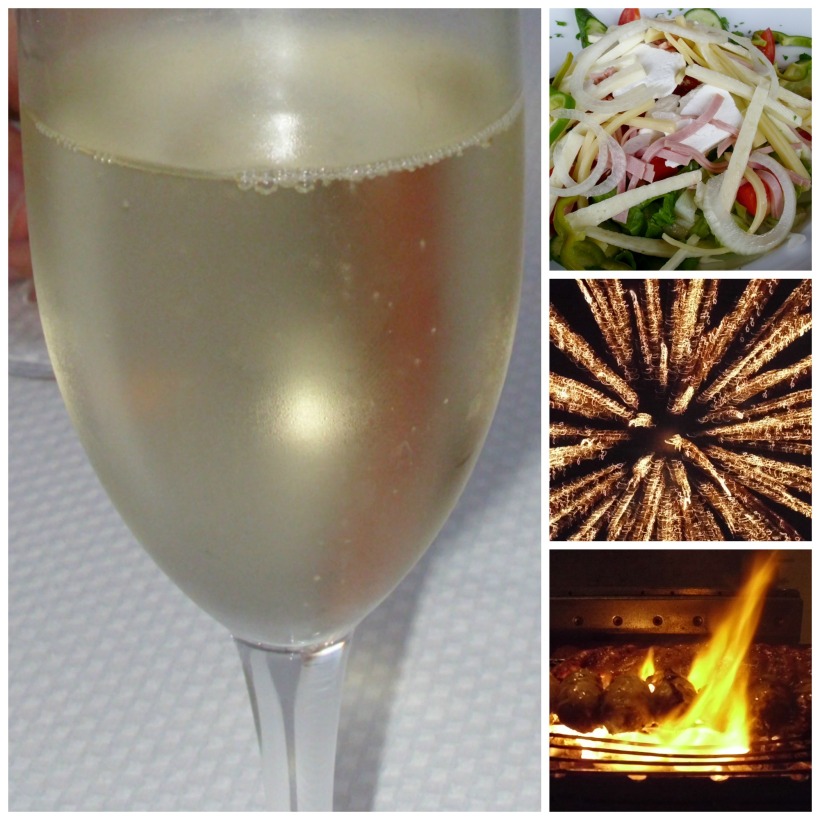 The salads were so fresh, the feta tasted so much better than the packaged stuff that you get over here, the meat was tasty and well seasoned.  Our usual evening fare was BBQ – kleftiko, seasoned steak, kebabs.  I was amazed to see the amount of home grown fruit and veg – pomegranate, limes, bananas, olives, peppers.  Things seemed so much cheaper too – 45 cents for a watermelon (compared to £2.00 upwards here), 65 cents for a gala melon.  I could definitely see why so many of the locals had great figures – a combination of those hills, the heat and the produce available!

Friday turned into another chilling out day with another trip down to Coral Bay, and Saturday was a trip into Paphos again.  M and I wanted to go to the Tombs of the Kings, so we walked the 2km from the harbour up to them.  It was pleasant enough and it looked like they’d discovered another tomb since I last visited.

We landed at 3:15am, and were home and in bed by 4am.  Having been up for 24 hours, I struggled to sleep properly, and woke up at 8am, feeling relatively ok.

So, my thoughts on Cyprus 10 years on?  The people seem much friendlier.  The sun is not stronger (I only managed to get burnt on one day, where I’d missed putting some suncream – thank you Hawaiian Tropic – you’re the first sunscreen that seems to work well), and I have come back with a tan.  I do now have to battle with a sunburnt parting and the ensuing peeling scalp issue (delightful).  The pace of life seems much calmer and people seem to have a better quality of life compared to here (but I am probably looking at it through holiday tinted specs).  Property has become expensive, and fuel is comparable to here.  I also think it made a real difference being up in the hills where there was a nice breeze most of the time.  Would I go back?  Yes, but with different company (well, I’d take M, of course!!).

It’s back to work with a bang tomorrow, and back to reality properly.  The washing is on, we’re off to my parents’ for tea, and I need to devise my way forward to catch up with my Couch to 5k (I’m now quite behind).

10 thoughts on “Back to reality”

This site uses Akismet to reduce spam. Learn how your comment data is processed.