Today's #janathon is brought to you by mad dashes round the house and up and down 3 flights of stairs. No blog as I am away this evening

Day 8 of Janathon was a mad dash around the house and trips and up and down our stairs.  The purpose of the mad dash was to pack and head up to my mother-in-law’s after work, as we were staying with her for the night.  There were definitely a few out of puff moments!  The reason for staying away from home on a Thursday night?  Well…

Today's #Janathon was 10,400 steps around the NEC in Birmingham

Matt and I, for Day 9 of Janathon, trekked over 4 and a half miles around the NEC for Autosport International.  It was interesting, and I enjoyed the live show.  I thoroughly enjoyed the people watching too.  I didn’t spot any big celebrities, though I did see Shane Lynch (of Boyzone fame).  He’s drift car racing these days apparently.

It was a long day, brightened by a pink Caddy and a well deserved coffee!

All of the walking, followed by sitting in the car for quite a long time meant I was quite stiff yesterday morning, so…

I was quite chuffed at being able to hold downward dog for a bit longer.  I don’t think I’ve really ever said, but this is one of the poses I find most difficult.  My legs just don’t want to straighten, and I get sore wrists so I always struggle to hold this pose.  I’m not holding it for the 5 breaths that my old yoga teacher used to like us to hold, but it’s getting better.

Which brings us up to today’s Janathon.  I would like to think that some huffing and puffing as I walked out of the Apple shop (as in Apple products, not a greengrocer) would count, but I suspect not.  My iPod has decided to stop syncing.  I’ve tried all the tips suggested online by their support, but it isn’t playing ball.  I had a problem with my old iPod a long time ago, and Apple were really good about it.  Today, I wandered in and there was a queue for the tech team.  I got to the guy who seemed to be coordinating, and he said I needed to make an appointment.  No problem.  He asked what was wrong with it, and I’d taken a screenshot of the issue with my phone to show (as my memory isn’t the best).  He laughed and said that he was sure they could help with the (faulty) iPod, but he couldn’t do anything about my (working absolutely perfectly) Samsung mobile.  Urgh, Apple snob.  Then as I headed towards John Lewis, I thought I bet the Samsung tech team were having a quieter Sunday.

I digress.  Janathon has been a walk around town, some active (ish) housework, and some more yoga because I’m still a bit stiff. 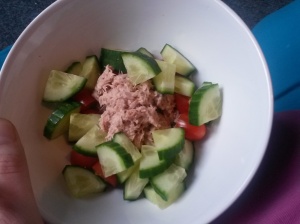 In Whole 30 news, everything is going pretty well.  I felt a bit apprehensive about going away overnight and then to a show, but I planned it all – breakfast quiche and juice, salad and bananas, black coffee.  Not a single non-Whole 30 thing passed our lips.

There are a couple of things that I have noticed so far.  The first is that I seem to be a lot thirstier at the moment.  I don’t remember this being the case last time, and I don’t think I have added more salt into our food than normal (and I don’t add much generally).  The second is that I seem to have missed the “kill all the things” stage, but I am firmly in the grips of the reputed “let me nap” feeling of days 6 and 7.  I think the last thing I noticed is that last time we did a Whole 30, I ended up weighing literally every day in the first week or two just to see what the scale said.  While I am interested, I’m not being driven half mad by daily scale watch.  I’d like to know if there has been a weight loss, but in all honesty, I’m just too tired to have to deal with the “Woohoo it’s as/more than expected” or the “Boo, this isn’t enough”.

How was your weekend?

5 thoughts on “Catching up on my Janathon”