Brace yourself, it’s a long one.  There are pictures though.

Yesterday was one of my favourite days of the year.  This year, it was even sweeter as it was my first day off (excepting Bank Holidays and weekends) since Christmas.

I love the County Show.  I love the build up to it, the reminder that I live in an amazing part of the country, and that at heart I am a country girl, even though I dabble in thoughts of moving to a bigger city.  I also love that it is a day that I get to spend with my mum.  I hold dear the time I get to spend with my family and spending the day out with mum is one of the highlights of my year.

Life didn’t go quite according to plan in the morning.  I thought I’d set myself up for the day with a bowl of porridge.  No porridge.  This virtually never happens.  Ok, Plan B – scan bran (Slimming World super-tough cardboard-like Ryvita to non-Slimming Worlders) with cottage cheese and peanut butter (not together – that’s just plain wrong).  I’d never tried scan bran before.  It’s like chewing, well, the unchewable.  Mum appeared just as I finished the second biscuit (there were another two that I was meant to eat, but had jaw ache so couldn’t).  We caught the bus to Westpoint and started our wander. 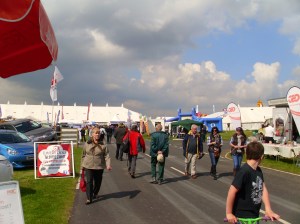 First stop, the alpacas.  The problem with the County Show is that I get all “animal broody”.  I would have a farm if I could.  Don’t get me wrong, I couldn’t be a farmer, but I’d just like that land to house the animals I’d love to own.  Alpacas are one of these animals.  I mean, just look at that face…

Plus, you could spin their fleece and make stuff out of it.  I’m allergic to sheep wool, but alpaca wool doesn’t seem to be an issue.  From the alpacas, we wandered down (via the RAC stand, a dog treat company and the Guide Dogs for the Blind stand) to the game area (game of the animal variety).  I love the birds of prey, I find them fascinating.  I caught a picture of these beauties (don’t worry, no dogs were hurt in the making of this stand).

Then it was on to the heavy horses.  I used to ride, and ride well.  I’m currently too heavy to get back into the saddle, but it doesn’t stop me day dreaming about starting riding again, or one day owning my own horse.  I adore the gentle giants that are heavy horses, and I’m always amazed by their ability to pull such huge weights. 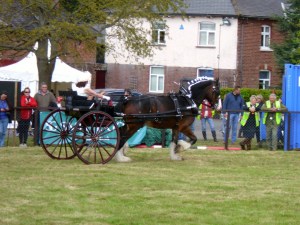 I was especially impressed by the horse on the right, Charlie.  This was Charlie’s first show, and hasn’t long been broken by the sounds of it.  He got a little twitchy when he was bored, but otherwise was impeccably behaved. 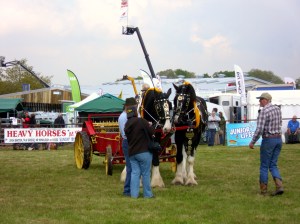 So, that would be an addition to my fantasy farm.  I lie, I’d probably have a whole stable of various breeds/classes of horses.  After wishlisting my stable, and looking at some of the classic motorbikes…

… It  was coffee time, followed by a visit to the mohair and angora tent.  Add sheep and goats to my farm.  I have always loved goats.  No idea why, but even now I think they’re great.

At this point we were getting quite hungry, so we made our way to the food tent.  We went there via the Young Farmers tent, in the hope of seeing my godfather’s son for a catch up.  As it happened, we bumped into him in the food tent, shortly after purchasing our bread for lunch.  I had a wonderfully fragrant and equally as delicious spelt bread with red onion, rosemary and feta, while mum opted for a cheese and onion spelt bread.  Pudding was a spelt fruit bread.

The savoury breads were accompanied by a small bag of cheese bits.  Mum’s was washed down with a pint of Old Moggy (a real ale from Teignworthy Brewery).  I don’t much like real ale, so stuck to my squash.  Unfortunately the rain started as we were eating, but it didn’t dampen spirits – rain is usual fare for the County Show, and we were prepared.

After lunch, we went back to the food tent and completed a couple of laps, purchasing bits and bobs along the way.  I bought all of the things for my Foodie Penpal this month – all independent business.  One great discovery I made was Tea’s Me.  Aside from loving the play on words, I really like spearmint tea.  I was introduced to it when I had my first “proper” job.  Apparently spearmint tea has a whole host of benefits.  Twinings do a camomile and spearmint tea, but I find it is too camomiley, not enough mint.  After a quick swig of a tester at the stand, this spearmint and green tea is the perfect blend.  I don’t like green tea on its own, but you can’t taste it in this.  For £3.50, it’s a real bargain.

When the rain became a little too persistent, we sought shelter in the BBC tent, where live bands were playing, waiting the weather out until it was dry enough to go to the main arena.  In the waiting area, the South Devon Hunt (well, the Hunt Master and hounds) were getting ready.  I was really surprised by how friendly the hounds were.   Not that I expected them to be vicious, but they’re working dogs, not pets.  The other thing I was surprised about was that they hunt with hawks still.  I’d add dogs into the mix on my imaginary farm, along with a hunter or two. 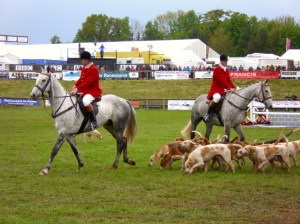 That concluded our mum/daughter day out, revelling in all things Devonian.  I was glad it was a rest day, as my legs are stiff.  However, before I disappear to get on with my weekend, I would just like to share a non-scale victory.  This time last year, at the show, I arrived home with an incredibly sore back, knees and ankles, and that was with a lot of sitting down throughout the day.  This time round, nearly 3 stone lighter, I have sore knees from slow walking, but no other maladies to complain of.