Friday night, we headed out after work for out monthly Supper Club.  Supper Club originated nearly two years ago after a mutual friend and work colleague was unceremoniously let go, and to say good bye, we all headed out for an Indian.   From there, we have tried to get out once a month to meet up and eat good food in our own eclectic company.  We hadn’t managed to get out properly since the Olympics’ opening ceremony last July for one reason and another, but we made it out this month.  My food choices weren’t exactly Slimming World friendly – I shared a starter of nachos, followed by a BBQ pulled pork tortilla salad.  It was beautiful, though I ended up feeling very full.  Not as full as a friend though, who took on the Hank Starvin’ challenge – two 6oz beef burgers, bacon, a chicken breast in a bun, 3 corn on the cobs, a load of chips and slaw.  It took him over two hours to eat it, but he managed.  If anyone is ever in the Newton Abbot area and is looking for a good Mexican, I really do recommend the Rio Grande.

Saturday I’ve already covered (here), and part of Sunday.  I managed my long run, relatively easily, though it never fails to amaze me the amount of people who just refuse to walk single file (if they’re already 2/3 abreast) and force me on to the road.  I am going to have to rethink the time of my long runs.  I really don’t want to endure the traffic.  Sunday afternoon, we headed up to Maunsel House for M’s cousin’s wedding.  The bride looked stunning, the venue was gorgeous, the weather was perfect.  The vows seemed entirely perfunctory, and I didn’t much like the registrar man – he was uncharismatic.  There was, of course, the obligatory family bicker (though not in earshot of the married couple thankfully), and BLOODY PEACOCKS!  Blasted things.  I wasn’t even protected by ducks this time. 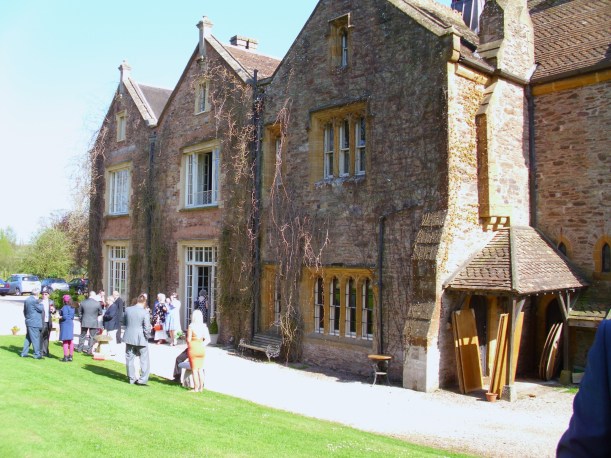 Originally, we were meant to be staying in this quaint little cottage, but I am a creature of home comforts and like my own bed too much.  As it turned out, we wouldn’t have been able to have a lie in anyway due to the departure time.

Never (recently) have I eaten so much bread!  It was high tea for the main reception breakfast bit, with a hog roast later in the evening.  We left the happy couple at around 10:15pm when the army friends of M’s cousin started getting a bit rowdy, and picking up the guns displayed on the walls.

Monday morning broke, and I suddenly became unable to get out of bed.  The workout on Saturday had the unfortunate side effect of working abdominal muscles that had laid dormant since my first kettlebells session.  It’s surprising how much you use your tummy muscles.

It was Mummy Tub’s birthday, and given the weather was so gorgeous…

… we had a BBQ in my parents’ back garden.  It was lovely, as my sister was also home for a bit.  The dog enjoyed having the whole pack around, and enjoyed scouting for dropped food even more so.

Even the cat graced us with her presence, lolling around in the grass, attempting to catch the occasional butterfly (or just staring at the strange person trying to take a photo of her).

Lunch was great, more bread, but Mum had very kindly bought some special Slimming World friendly sausages, and made burgers for us.  Very tasty!  All accompanied with a salad – there’s something about eating salad in the garden on a lovely sunny day. 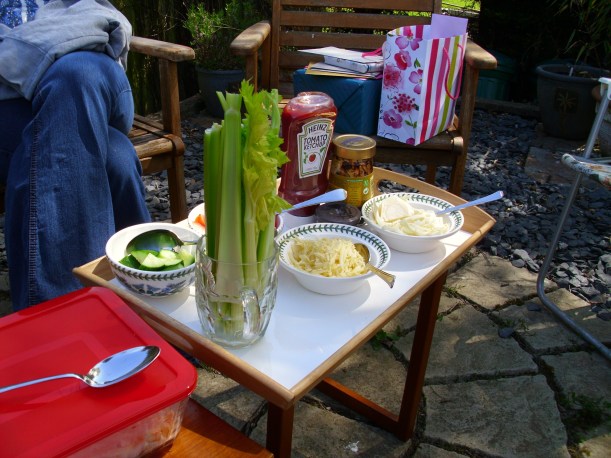 After mooching around Go Outdoors with the family and then a bite of tea, we headed home, ready to start the working week.

Tuesday rolled around too quickly, and with it, my run and weigh in.  I ran the same route as last week, just over 2.5miles in 32 minutes, I thought that was quite good for me, as the route is the hilly route.  I had a small calf twinge about half way through, which I think was more hill based than running.   I was late for my Slimming World group, and it turned out I had put on 1.5lbs, so I’m back up to the 16 stone bracket.  Ah well!  It’s not every week that you go out with friends, go to a wedding and celebrate a birthday!