I am aching a lot after Zumba Tone last night.  My upper body is fine, but my lower body is stiff.  Pesky squats and lunges!  I thought I would suffer, as I couldn’t balance in the lunges, which is usually a sign I’m either super tired or have falling levels of fitness (muscular fitness, cardio wise, I’ve probably never been so healthy).

Fast forward through my rather miserable day at work, and I went out for a run.  I got through the first 5 minutes, struggling, telling myself that I would feel better and settle into it in the next 5 minutes.  10 minutes came and went, and I felt worse.  My legs were screaming out to stop.  I’d slowed down so much it wasn’t even a walk.  By the 12th minute I broke into a walk and just couldn’t recover.  My thighs and bum just couldn’t do it.

I’ve learnt a couple of things, amidst the excuses for not completing the run:

I  am beginning to feel a bit daunted by coming to the end of Couch to 5k.  People who know I am following it are beginning to ask what I will do at the end of the podcasts.  Honestly, I don’t know.  I find the idea of losing Laura a bit scary.  I will download the speed and stamina podcasts too, but I will have to have a think about the future plans (music wise).

My exercise is definitely doing some good though, as the scales showed a 1lb loss this week, so that’s the 1lb on from last week gone.  Additionally, I have decided to get involved in a personal challenge with one of the other girls at group.  There is 1lb between us, and we’ve pledged to go on a 10 week “no gain” challenge.  I managed a 10 week consecutive loss, which finished 2 weeks ago.  Now, we’re challenging each other.  This is going to be good for me.  M has gone off the boil on the weight loss front lately and I don’t feel like I am getting the support I need from him, so doing this with a friend will help.

I feel a bit “blah” about the loss, mainly because I feel “blah” having not completed the run, but it is a good thing to have lost.  I need to regain my focus on the food front, and combine it with a good exercise plan.

A terrible thing has happened.  I have been recognised whilst out on the run.  I wouldn’t have minded if the sighting had happened early in my run, but it was 5 minutes from the end.  I’d like to think that I looked gazelle-like and graceful, but suspect I looked more like a scarlet faced, lumbering hippopotamus (can hippopotami turn a shade of beetroot red?).  I still lapped everyone sat on the sofa though, so I don’t feel too bad.

It was a tough run last night.  I had to kick myself out the door pretty hard.  It had been a really long, and pretty deflating day.  M and I had rushed up to mother-in-law’s on Saturday, as it was future-stepfather-in-law’s birthday.  It was a bit hectic on Saturday, with chores etc, then we had to head up to mother-in-law’s (she lives about an hour and a bit away).  She wanted us to come up for the Wales-England rugby match – we arrived late, and had a frosty reception.  I personally didn’t see too much of an issue – the match was still on, she hadn’t put food on, and we weren’t going to the pub to watch it.  Instead, we sat in a different living room, on an uncomfortable sofa, and watched it on a smaller TV than our own.  After the game, we headed out with the grandparents-in law too for an Indian.  It was a nice enough meal, though the restaurant was really noisy and it was difficult to hold a conversation.  We were late to bed on Saturday, and had to be up early yesterday morning for the marshals’ training day at Castle Combe.  The training didn’t go so well, and I felt very flat, which is unusual for me as I’m a real fan of Combe.  The training involved a scenario for a major incident, but there were so many of us, we couldn’t all be involved, so some of us (including me) were “spectators”.  That basically meant stand around, freezing in the snow and sleet, watching the others do stuff for nearly 3 hours.  Not pleasant. 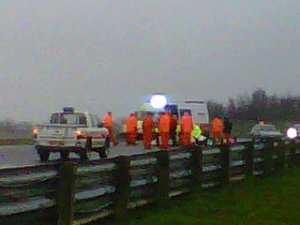 I digress… Combined with the lasting cold from the morning, plus a busy weekend, I really wasn’t fancying a 28 minute slog.  I promised myself that if I got to 20 minutes, then I could come home.  Needless to say, I reached 20 minutes, then 28 minutes and decided to stop about 30 seconds later than Laura said to stop (I WAS going to make it to that next lamppost).  I walked home, ran a very hot bath, and let my muscles soak.  I’m finding that this penultimate week is really beginning to make my thigh muscles sore – outer thigh muscles specifically.  I suspect a foam roller will be an imminent purchase.

Thankfully it is pay day next Monday, and I have run out of bath bombs, so I will be heading to Lush on the Easter weekend to buy some more treats.

It is blowing a gale again, and absolutely hammering down with rain.  On to Week 8 I trekked.  That’s a 28 minute run, and it’s surprising how much difference 3 minutes make.  I started off my run with my Garmin actually syncing pretty quickly for a change.  Lately it’s been ridiculously slow, and I can’t work out why.  The run, aside from being freezing cold and very wet, went quite well, and I felt reasonable for the majority of it.  I remember, 8 weeks ago, on a freezing Friday night, where it was raining harder than it is tonight, I decided to be a bit brave and head out into the night.  I enjoyed my first run, and now like looking back at the times since then – I’m now running, unbroken for 28 minutes, covering more than a kilometer more, and have shaved 2 minutes off the average pace.

The final three minutes I struggled with though.  I had to get the mental strategies out.  I didn’t dust off The Dory (by that point, my pace was so slow, it wouldn’t have worked, speaking Whale would have been more appropriate), but I did have to work lamp post to lamp post.

Steady on Tub, there is a good chance that you might actually finish a running plan at this rate!  What should I do to celebrate?

In other news, I am looking at becoming a Foodie Penpal.  I saw the badge on 111lbs’ blog, and then saw that there is a UK version at Rock Salt.  I love the idea of this, and I’m hoping that I’ll be in for April.  I’m just waiting to hear back.

Finally, M and I have been invited to his cousin’s wedding.  I have a dress in mind, but I don’t know if it fits.  I am hoping that if it doesn’t, it will shortly.  I do feel a new shoes occasion coming on though!